I’ve had an Xastir APRS client running on my shack’s computer for years. There’s no GPS, so it shows fixed location. There’s no radio either, information flows both ways via APRS-IS server.

My IC-R5 receiver was sitting idle, so I started to wonder how to turn it and Xastir into a minimum hardware iGate. In Greater Helsinki area there’s no need to improve APRS coverage, but when has the real need been the driver in this hobby?

The minimum setup for an iGate requires:

The only tricky part is the soundmodem configuration. Instructions found on the net didn’t work with Ubuntu 12.04. In the next post I’ll show how I configured mine.

It looks like my Fritzel FD4 windom antenna has an undocumented band. SWR (blue line) is well below 2:1 throughout the 6 m band. 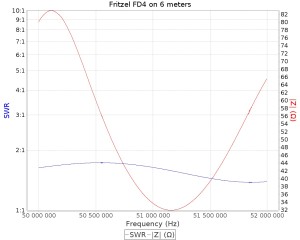 I also tried it on 4 meters but SWR doesn’t look promising. 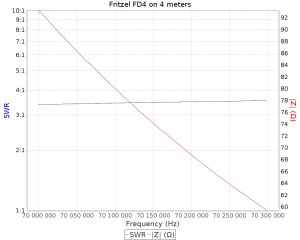 Ubuntu releases 2 new versions every year, in April and October. About one and an half year ago I got fed up and decided to update only when a long term support version is released. In synaptic you can choose to get notifications only for LTS versions. Here’s the Ubuntu release timeline.